In every circumstance, Lynch brings to the table a wealth of experience as a musician, writer, and producer that is drawn from more than two decades on the road and in the studio.

"When you write, you have no idea where the song will go," he says. "It's an interesting process every time. You are trying to write a decent song . . . There is no change. That's the wonderful thing about writing. You just wake up and say what's in your heart and what's on your mind and put your message out there."

Tom Petty
I was in Cherokee Recording Studios in Hollywood when I heard. I was working with [producer] Jimmy Iovine, who knew John and had worked with him quite a bit. Someone called the studio from New York and said that John had been shot. We thought it was a gag, and we kept working. Then someone called and said, "John's dead." It just stopped the session. I went home, and on the way I could see people sitting in their cars at traffic lights just crying. It was a hard thing to believe. I still have trouble believing it.

John Lennon meant everything. His influence was immeasurable in those times, when I started to play, in the mid-Sixties. He was probably one of the two or three great rock singers ever, and what can you really say about his songwriting? He was just ... transcendental. And his rhythm-guitar playing -- I really studied it quite a bit. If you ever want to see some great rhythm guitar, check out A Hard Day's Night when they do "And I Love Her." He could really just make a band just kind of surge and jump.

To me, Lennon's legacy is honesty. When I was young and seeing the Beatles performing on TV, they were the first ones who weren't just saying pat, showbiz banter. They'd actually say something. He was a great role model for my whole generation, because you knew when John suffered and you knew when John was happy, but it all somehow came out OK.

Blind Boys Of Alabama Running Down A Dream
By Scott Aiges
Billboard - April 7, 2001

Tom Petty Toured With The Gospel Act, 'Who Shook The Building Every Night'
When it comes to having friends who are up high in the pop music world, the Blind Boys of Alabama are particularly blessed -- which may help the gospel singers' crossover dreams come true.

Peter Gabriel is releasing the Blind Boys' new album, Spirit of the Century, on his Real World label. Bonnie Raitt and k.d. lang have recorded with the group. Anthony Keidis of Red Hot Chili Peppers has turned up at their shows. And Tom Petty invited the Blind Boys to join him on your with the Heartbreakers in 1999.

The Blind Boys "did quite a few dates with us -- and they were just amazing," Petty says. "They shook the building every night. I sort of got fascinated with seeing if there was a crowd that they couldn't just absolutely slay. And it didn't really matter. Every night, they just tore the place up."

"We're just going out to play. You know, there aren't many rock & roll bands out there anymore, and we're kinda enjoying having one," says Tom Petty of the summer road trip he's taking with the Heartbreakers. "We're just raring to play -- we've had enough time off."

Petty says the Heartbreakers have sounded "absolutely vicious" at rehearsals. "The idea is to do a lot of the songs that we haven't done for a long, long time: 'Here Comes My Girl' -- which I don't think we've done in ten years -- and 'Even the Losers,' from Damn the Torpedoes." With more than forty songs in his rotation, Petty promises an evolving set, with the possibility if a few brand-new songs making it into his two-hour set. "We've been working on a record for some time, really," he reports, "and we're almost finished writing -- so there is the chance we'll bust a new song or two.

"I haven't even seen the stage set," Petty says with a laugh. "We're concentrating on the music. Nothing fancy -- just a barebones rock & roll show. It will be good shows all around. We're just gonna have a blast."

"We were playing in Vegas," says Tom Petty, "and I thought, 'We can get married in a matter of an hour here.' So we just quickly did it in Las Vegas and then performed a real ceremony back in L.A." That's right, folks, after a six-month engagement (and a two-night Sin City stand with the Heartbreakers that closed the first leg of their summer hit parade), Petty tied the knot with longtime honey Dana York. Two weeks later, the couple invited their "ultimate choice for minister," Little Richard, to perform a ceremony for family and friends. "We had an all-female mariachi band that was really great," says Petty. "We all just got drunk and listened to the mariachis." The newlyweds and the Heartbreakers then hit the road for the second leg. "We're joking, calling it out honeymoon," Petty says. "But this is our favorite thing to do, to tour America in the summer. Dana loves the road. Maybe more than me." After the tour, "it's back in the studio," says Petty. "We're long overdue to make a record. I've been writing an album, and it's pretty cool. It's on a whole different trip." 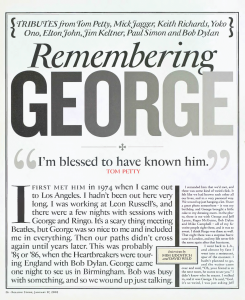 I first met him in 1974 when I came out to Los Angeles. I hadn't been out here very long. I was working at Leon Russell's, and there were a few nights with sessions with George and Ringo. It's a scary thing meeting Beatles, but George was so nice to me and included me in everything. Then our paths didn't cross again until years later. This was probably '85 or '86, when the Heartbreakers were touring England with Bob Dylan. George came one night to see us in Birmingham. Bob was busy with something, and so we wound up just talking. 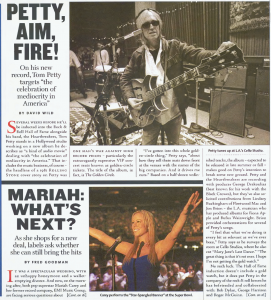 On his new record, Tom Petty targets "the celebration of mediocrity in America"
Several weeks before he'll be inducted into the Rock & Roll Hall of Fame alongside his band, the Heartbreakers, Tom Petty stands in a Hollywood studio working on a new album he describes as "a kind of audio movie" dealing with "the celebration of mediocrity in America." That includes the music business, of course -- the headline of a 1981 ROLLING STONE cover story on Petty was ONE MAN'S WAR AGAINST HIGH RECORD PRICES -- particularly the extravagantly expensive VIP concert seats known as golden-circle tickets. The title of the album, in fact, is The Golden Circle.

"I've gotten into this whole golden-circle thing," Petty says, "about how they sell these seats down front at the venues with the names of the big companies. And it drives me nuts." Based on a half-dozen unfinished tracks, the album -- expected to be released in late summer or fall -- makes good on Petty's intention to break some new ground. Petty and the Heartbreakers are recording with producer George Drakoulias (best known for his work with the Black Crowes), but they've also solicited contributions from Lindsey Buckingham of Fleetwood Mac and Jon Brion -- the L.A. musician who has produced albums for Fiona Apple and Rufus Wainwright. Brion provided orchestrations for several of Petty's songs.

"I feel that what we're doing is every bit as relevant as we've ever been," Petty says as he surveys the room at Cello Studios, where he also cut "Mary Jane's Last Dance." "The great thing is that it's not over. I hope I'm not getting the gold watch."

★★★★★ | Tom Petty and the Heartbreakers | Damn the Torpedoes -- Backstreet, 1979
In 1979, Tom Petty and the Heartbreakers have been crafting professional, appealing straight-ahead rock for three years without wowing the masses. But the band reached its peak when the rootsy Petty finally accommodated the Heartbreakers' need to kick the sound up from classic rock to modern. It's no coincidence that Damn the Torpedoes was released in a year crucial to punk and New Wave's explosion into the mainstream. Merging folk-based Sixties rock with free-form Los Angeles pop and pressing more urgently than ever before on the roadhouse tang of Petty's Southern youth, the Heartbreakers' third album coexisted peacefully with its harder-edged, synthy chart mates.

Damn the Torpedoes has got all the shimmer and curve of the Byrds without the dirty sandals. The whispering menace of "Refugee" showcases Petty's mature songwriting; "Don't Do Me Like That" is something like New Wave R&B, its short lines popping like corn kernels before the shouted rock & roll segment takes the whole thing back to FM radio, which is exactly where this song resided for umpteen weeks. "Shadow of a Doubt (A Complex Kid)" features fast-ticking drums that don't slow down even during the quiet bridge; you can hear hours of careful attention to Mick Jagger in how Petty's trademark nasal blurt slops over lines and moans fiercely on the chorus. Petty's Florida roots make a hick's joke out of the driven blues rave-up of "Century City" "Like modern men, and modern girls/We're gonna live in the modern world," he drawls to the shiny corporate towers of L.A.'s glittering necropolis. This is about as deep as the album gets, beyond Petty's earnest examinations of high-school-level sexual discomfort. But the timelessness of the Heartbreakers' best songs has always been a purely musical proposition; Damn the Torpedoes is ineluctable roots rock that's built for the modern world.