The Traveling Wilburys with Vol. 3, the second tongue-in-cheek collaboration involving some of the biggest names in the business. Although the liner notes list them as Spike, Clayton, Muddy and Boo, the Wilburys are respectively George Harrison, Jeff Lynne, Tom Petty and Bob Dylan. This collection of no frills rock 'n' roll is sure to be a hit.

As with the 1988 Vol. 1, the Wilburys offer a heaping helping of acoustic guitar-based rock. All four band members trade turns at lead vocals, with Dylan featured most often. His distinctive vocal style compliments the rugged acoustic sound of the band. Each musician plays acoustic guitar with Harrison adding electric guitars, Lynne playing keyboards and bass, and Dylan blowing the harmonica.

Despite the possibility of battling egos, the Wilburys operate well as a group. Though Dylan dominates the singing, producers Harrison and Lynne build in enough backing vocals to power a tabernacle choir. This is a characteristic of most Jeff Lynne projects. Surprisingly, no single member dominates any one song as was evident on Vol. 1.

Just close your eyes and you can almost see Spike (George Harrison), Muddy (Tom Petty), Clayton (Jeff Lynne) and Boo (Bob Dylan) decked out in overalls, tapping their feet and having a rockabilly good time while jamming on the front porch of a shack somewhere.

Faced with following up their spirited debut minus Lefty -- the late Roy Orbison -- the Wilburys put together Traveling Wilburys Vol. 3 (Lord knows what happened to Vol. 2), a solid 11-song collection, albeit one that doesn't match the first.

Should that surprise us? No.

"Volume 3" -- The Traveling Wilburys (Wilbury)
OK, so the Traveling Wilburys don't travel and aren't really named Wilbury. That doesn't mean the music is a sham. Tom Petty, George Harrison, Bob Dylan, and Jeff Lynn (Muddy, Spike, Boo and Clayton Wilbury, respectively) have come together for a second disk, and while it doesn't have spectacular high points it doesn't have many lows, either.

Petty, Harrison, and Dylan share most of the vocals with startling results because they sound strikingly like each other. The late Roy Orbison -- to whom the disk is dedicated -- is missed.

Most of the tunes, especially "If You Belonged To Me," "New Blue Moon," "Wilbury Twist" and "The Devil's Been Busy," are acoustic guitar-dominated lightweights with an amusing tongue-in-cheek quality and a lackadaisical but engaging feel.

"She's My Baby" is an electric rocker dominated by the neo-wall-of-sound production technique of Jeff Lynn and the guitar break by Gary Moore.

Overall, the mood is loose and light. There is no pressure to imbue every word with deep inner meaning or justify every chord change. But neither is there much exploration or energy.

The music world's a big joke to the Traveling Wilburys, whose new disc only sounds like it was written and recorded in an afternoon. Don't be fooled. Pride being what it is, this low-key supergroup has made a first-rate followup to their surprise 1988 hit.

For all the wink-wink, nudge-nudge antics, the Wilburys are quite serious when it comes to music. In fact, with the exception of Tom Petty, whose solo career is still at its peak -- it might behoove George Harrison, Bob Dylan and Jeff Lynne to become full-time Wilburys.

Considering that "Traveling Wilburys Vol. 3" (Wilbury-Warner 26324) is, in fact, only the second Traveling Wilburys album, it seems reasonable to assume that the project is essentially a goof. That certainly would explain "7 Deadly Sins," a warped Dylan rant over "Blue Moon" harmonies, or "Wilbury Twist," a dance-craze ditty to silly it makes "The Loco-Motion" seem like "Das Ring des Nibelungen." But unless you feel particularly charmed by such superstar shenanigans, this is for the most part unnecessary travel. 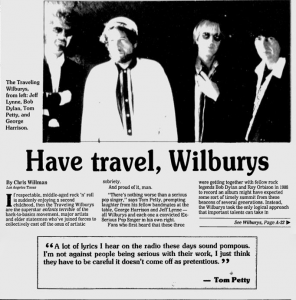 If respectable, middle-aged rock 'n' roll is suddenly enjoying a second childhood, then the Traveling Wilburys are the superstar enfants terrible of the back-to-basics movement, major artists and elder statesmen who've joined forces to collectively cast off the onus of artistic sobriety.

And proud of it, man.

"There's nothing worse than a serious pop singer," says Tom Petty, prompting laughter from his fellow bandmates at the table, George Harrison and Jeff Lynne -- all Wilburys and each one a convicted Ex-Serious Pop Singer in his own right.

Fans who first heard that these three were getting together with fellow rock legends Bob Dylan and Roy Orbison in 1988 to record an album might have expected some sort of timely summit from these beacons of several generations. Instead, the Wilburys took the only logical approach that important talents can take in collaboration: serious slumming. A classic of deadpan humor and sly nods to pop tradition, it was more of a barroom battle of the bon mots than a weighty meeting of the minds.

On the Record: Breaking up is hard to do, but when stars regroup, striking new constellations appear
By Ray Boren and Jerry Spangler
The Deseret News - Saturday, December 1, 1990

Long, long ago, survivors of major rock-group breakups would scramble from the wreckage, dust themselves off and look around for someone new to perform with. As a result we'd get "supergroups." Like Blind Faith or Crosby, Stills, Nash and occasionally Young. Or the early Jefferson Starship.

And the hoopla would commence.

Today we get some of the hoopla, but neither the musicians nor the fans seem to take these rock 'n' roll summits quite so seriously. Often, new combinations like Damned Yankees and Bad English have to prove themselves once again. Others, like country's Trio and The Highwaymen and pop's Traveling Wilburys, are immediately accepted but seen as "special events" more than long-term bands.

Three new albums demonstrate how varied the "supergroup" phenomenon is in the '90s.

Who says you can't grow old gracefully? The remaining four members of the Traveling Wilburys. The super-group, formed in 1988, is comprised of four middle-aged musicians who, some might say, are past their prime. The Wilburys' 1988 debut album, Vol. 1, defined the Wilburys' style as straightforward rock & roll with a country tinge. The album spawned three moderate hits, Handle With Care, Last Night and The End Of The Line. The Wilburys successfully bridged the gap between the sixties, the seventies, and eighties. With their follow-up record, Vol. 3, The Traveling Wilburys attempt to take on the nineties.

Although the actual musicians (Bob Dylan, George Harrison, Jeff Lynne, and Tom Petty) are not credited anywhere on the album, their voices and styles are immediately recognizable. In an attempt to divert some of the media attention away from the musicians and onto the music, the album is attributed to Clayton, Spike, Muddy and Boo Wilbury. As reported in a recent interview, Tom Petty explained that "everybody [in the band] has been burned by supergroups -- they're not usually any good, so we've tried to steer away from that label as much as possible."

Travelling on with the Wilbury's
By George Olschewski
The Montclarion --December 6, 1990

1988 marked the debut of an unknown band with a strange name -- The Traveling Wilburys. Soon after its release, it started getting rave reviews, and this unknown band was well on its way to stardom.

The band might have been unknown at the time, but the members weren't. Rock and roll fans immediately recognized the Traveling Wilburys -- Spike Wilbury (George Harrison), Muddy Wilbury (Tom Petty), Clayton Wilbury (Jeff Lynne), Boo Wilbury (Bob Dylan), and Lefty Wilbury (Roy Orbison). These five men took what was originally a fun-time screw-around jam session and turned it into an album, "Traveling Wilburys Vol.1." "It was fun the way everything came together, and it all felt natural," said Spike (Harrison).

Two years later, the Traveling ones gave it another shot. "Traveling Wilburys Vol. 3" was released. Some members of the Wilburys debated whether or not to continue without the voice and guitar of Lefty Wilbury (Orbison), who died earlier this year. The happy, jammin' feeling is still there, but the loss of Orbison shows. The only way to describe the feeling is a group of people who know that a dear friend will never be coming back. The music is still there, the fun is there, but the magic that Orbison put into the band is no longer there.