Those who scoff at "best of" albums would do well to remember their own first musical purchases. How many hipsters initially grooved to Elton John's Greatest Hits or Changes-One Bowie before coming savvy to the inherent vacuity of greatest-hits packages?

No "best of" album will ever be as relevant as one seamlessly conceived, sequentially recorded long player -- but some can serve to help youngsters catch up on an important artist's entire body of wrk. Such is the case with this new LP from Tom Petty and the Heartbreakers. Petty is the Byrds' biggest fan and the one who -- no matter what anyone says about R.E.M. -- first dragged that band's jangly, Rickenbacker-laden sensibility into the strong light of day. Petty has always had a real ear for the cultural charms of the new-Americana -- its freeway overpasses, tattoos, and taco shops -- which he brilliantly mythologized on such early songs as "Breakdown" and "American Girl." As the '80s progressed, however, Petty's oeuvre, untouched as it was by the whip-hand of punk rock, became increasingly irrelevant, and soon he was singing things like "I showed you stars you never could see / Baby, it couldn't have been that easy to forget about me," on "Even the Losers" (from his breakthrough LP Damn the Torpedoes).

Tom Petty's new MCA video "Mary Jane's Last Dance," starring bankrupt actress Kim Basinger as a corpse who's caught Petty's fancy, has to be one of the most revolting pieces of tape we've seen lately. Maybe director Keir McFarlane of Palomar Pictures was going for the camp factor, but we couldn't get behind the "Weekend At Tom's" concept. And how intriguing that Basinger, who passed on the part of a living -- albeit limbless -- character in the controversial film "Boxing Helena," would partake in this necrophiliac rock fantasy. Bleeech!

You've heard the old sayings "Can't walk and chew gum at the same time," or "Pat your head and rub your belly." Those sayings are about doing two things at once. Well, drummers who sing do FIVE things at once, counting the four limbs and voice. Singing drummers take the concept of independence to another level.

As a drummer, why should you bother going to the trouble of playing and singing? Well, read any musicians-wanted section, and you'll see the expression "vocals a plus" written after many ads. Quite simply, being able to sing makes you more employable. More importantly, it allows you to contribute to the musical environment in a whole new way.

To get an idea as to the plusses and minusses involved in drumming and singing, we contacted some of the best pro drummers in pop, rock, and country who sing almost exclusively WHILE they play: the Band's Levon Helm, Cactus Moser of Highway 101, Little Feat's Richie Hayward, Andy Sturmer of Jellyfish, Tom Petty & the Heartbreakers' Stan Lynch, Keith Knudsen of the re-formed Doobie Brothers, Neil Diamond's Ron Tutt, Willie Wilcox of Utopia, and John Dittrich of Restless Heart. The things they have to say just might convince you to take your singing out of the shower and onto the stage.

A Tribute to Tom Petty: You Got Lucky
Review by Tim Martin
Round Up - September 15, 1994

What does a record label do with a punk rip-off band that isn't selling any albums? Well, several record labels decided to let their no-brainer poor sellers perform a Tom Petty cover for the Tom Petty tribute album You Got Lucky on Backyard Records.

I don't know what Tom Petty thinks of the project, but if I were him I would be downright mad.

For any fans of Petty who might see this album in stores and be tempted to buy it, beware.

If you like Tom Petty for his originality, then you obviously don't want a cover album.

Or if you like Petty for his great arrangements and cool melodies, forget it. You Got Lucky mangles almost every cool melody into a punk grinder mercilessly, making the songs sound more like a really bad rip-off of the Ramones instead of Tom Petty.

Short Takes
By Robert Seidman
In, Around and Online - October 14, 1994

TOM PETTY, one of my favorite rockers will be previewing his new album "Wildflowers" in the Warner Bros. Records forums on America Online, CompuServe and the Internet's Worldwide Web beginning Oct. 17. You'll be able to download a sound clip form the first single, "You Don't Know How it Feels," which is being hand-delivered to radio on Oct. 19.  On AOL at Keyword: WARNER, on CompuServe at GO WBPREVIEW and on the World Wide Web at: https://www.iuma.com/warner .

Billboard - October 29, 1994
THIS AND THAT: Won't 250 Tom Petty fans be surprised when they bring his new CD, "Wildflowers" home from the record store, take off the shrink wrap, and discover that Petty has autographed the release. That's right, Petty signed 250 copies of the new disc and sent them to the WEA plant in Pennsylvania, from where they will be shipped to stores across the country. Is it as good as finding a gold wrapper in your candy bar, a la "Willie Wonka And The Chocolate Factory"? Not a chance, but still pretty cool... 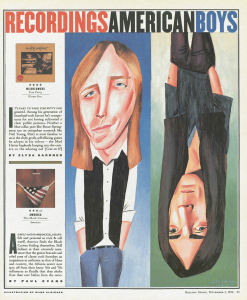 Wildflowers | Tom Petty | Warner Bros | ★★★★
It's easy to take Tom Petty for granted. Among his generation of heartland-rock heroes he's conspicuous for not having cultivated a clear public persona. Neither a blue-collar poet by Bruce Springsteen nor an outspoken maverick like Neil Young, Petty is most familiar to us in the dryly goofy, self-effacing guises he adopts in his video -- the Mad Hatter haplessly burping into the camera or the adoring oaf dragging around Kim Basinger's corpse.

Tom Petty's house, in the hills of Encino high above Ventura Boulevard, is kind of a cross between a mansion and a garage. The living room is an airy two-story foyer with a curving staircase, balcony and enormous free-standing fireplace and chimney. There's lots of polished wood, spotless carpeting and a German shepherd guard dog named Enzo to greet you. But hidden behind the vast chimney is a platform where Petty has his band gear set up, rec-room style. There's a drum kit, keyboards and loads of amplifiers--a 1965 Kustom-brand rack in padded blue-sparkle vinyl, a tiny old Fender tweed with the word MUDCRUTCH stenciled on top. Mudcrutch was Petty's band when he was a kid. Even at 48, he likes to plug in his guitar and play, loud.

After 18 years and sales of more than 40 million world-wide, Petty has yet to venture far from his roots. This week he releases his 11th album, "Wildflowers" (Warner Bros.). Produced by Rick Rubin, the former metal and hip-hop dude whose recent achievements include Johnny Cash's "American Recordings," "Wildflowers" was made entirely with organic instruments - no synthesizers, no computers, no high-tech studio wizardry. Instead, Petty and Rubin went for Mellotron, harmonium and other archaic keyboard sounds that evoke experimental mid-'60s records like the Beatles' "Strawberry Fields Forever" and the Beach Boys' "Pet Sounds." "That music's made such an impression on me," Petty says. "I have all the outtakes of 'Pet Sounds,' all the tapes of them rehearsing. I'll sometimes listen to one track being made for two hours, and it completely entertains me. It drives other people crazy."