State of the art
By Robert Goldberg
The Daily Princetonian - Wednesday, January 24, 1979

It's January of 1979, which makes it five years until 1984, twenty-one years until 2000, and just about time to do a wrap-up of last year. Actually, this column has little to do with art -- it's mostly about rock and roll. If you're more interested in the arts at Princeton, you can skip down to the end. If you're not interested in the arts at all, you're reading the wrong page.

1978 was the year that saw the crowning of two trends that had been on the rise for at least three or four years previously -- punk rock and disco. As my friends are fond of saying, the former is words without music, and the latter is music without words. Those are decent definitions, except I'm not sure that some guy screaming "I wanna be a dead boy" or "you make me cream in my jeans" qualify as lyrics, and I'm not sure that ten minutes of incessant bomp-bomp-bomp qualifies as music. So there we are: the songs of our era have no music, and no lyrics. I think we're in trouble.

MCA may have gotten more than it bargained for in its acquisition of ABC Records -- or is it less? Tom Petty, one of the prize acts on ABC's roster, is apparently balking at being shuttled to a new label.

"We don't consider ourselves affliated with MCA because there is no provision in our contract to our transfer to MCA," says Petty's manager Tony Dimitriades. "We're not affliated with any company. We're talking to various people."

Some companies are reportedly tossing multimillion-dollar offers toward free-agent Petty, but MCA isn't out of the picture. The label's new president Bob Siner is currently engaged in what are described as "delicate negotiations" with Petty's representatives. Siner is said to be optimistic about the proceedings.

At stake is Petty's third album, which is nearly completed. Dimitriades is hoping for a May release, but just who will release it remains to be seen.

MCA is also facing an antitrust lawsuit filed last week by several of ABC's independent distributors, but it can't look for sympathy from employees of ABC: Approximately 300 staff members were dismissed by ABC in that company's final act of self-dissolution. 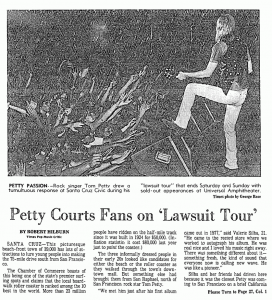 SANTA CRUZ -- This picturesque beach-front town of 39,000 has lots of attractions to lure young people into making the 75-mile drive south from San Francisco.

The Chamber of Commerce boasts of this being one of the state's premier surfing spots and claims that the local boardwalk roller coaster is ranked along the 10 best in the world. More than 23 mllion people have ridden on the half-mile track since it was built in 1924 for $50,000. (Inflation statistic: it cost $80,000 last year just to paint the coaster.)

The three informally dressed people in their early 20s looked like candidates for either the beach or the roller coaster as they walked through the town's downtown mall. But somehting else had brought them from San Raphel, north of San Francisco: rock star Tom Petty.

"We met him just after his first album came out in 1977," said Valerie Silba, 21. "He came to the record store where we worked to autograph his album. He was real nice and I loved his music right away. There was something different about it -- something fresh, the kind of sound that everyone now is calling new wave. He was like a pioneer."

Talk on the street says you, too, might go bankrupt. American rock star Tom Petty of Heartbreakers fame has gone and proven that fame 'n' fortune do not necessarily hang out together in ye olde rock 'n' roll world. Petty filed for voluntary bankruptcy under Chapter XI recently in Los Angeles.

MUSE Concert | Madison Square Garden | Sept. 22
Even though this concert was billed as Musicians United for Safe Energy (MUSE), and didn't specifically mention any one artist, you knew everyone was there to see the one and only Bruce Springsteen. From the T-shirts emblazoned with his face, to the cries of "Bruce!!," you could tell.

Fans endured a mercifully short set by Raydio and their easily forgotten three songs. Then we were treated to another short set by Peter Tosh—complete with Arabian garb. Tosh performed a rousing reggae set, but had trouble whipping the crowd even into a mild frenzy.

Another break, where we were temporarily diverted with a boring, no-nukes film, during which Nixon was booed and the American Indian was cheered, followed.

Tom Petty and the Heartbreakers new album, "Damn the Torpedoes," is a big disappointment.

For a veteran band, they should know better than to put one good song among so many mediocre tunes on an album.

"Don't Do Me Like That" has all the ingredients for a hit single. Good vocals, a catchy melody, and a name band behind it.

But the other songs just don't compare. More like shouting than singing, "Here Comes My Girl" is the worst. The song is much too long because half of it is repetitions of the title.

It isn't clear why the new album by Tom Petty and the Heartbreakers is titled Damn the Torpedoes, except that the conclusion of that famous naval battle cry pretty well describes what's imprinted on the vinyl. The album is an energetically displayed collection of nine songs true to the ideal of rock music as liberating celebration.

But "full speed ahead" also describes the course Florida-born Petty, 27, is charting as he emerges as a major force in contemporary rock music.

Petty may not be as daft at turning a phrase as Bruce Springsteen, but he has greater control as a singer without sacrificing intensity. And like Springsteen, Petty is cable in his writing to turn potentially trite images -- teen romance, hot cars etc. -- into universal experience.

Tom Petty's new album is called "Damn the Torpedoes," probably because of all the legal hassles which threatened to shoot down his chances of ever getting it released.

Well, it's finally here, and Mr. Petty and his band, the Heartbreakers, appear determined to come back with a vengeance. "Refugee" starts the album with a snarl and spit. "Somewhere, somehow, somebody must have kicked you around some," sings T.P., and the band backs him with the kind of power you wouldn't want to face in a gang fight.

Next is the strained and struggling opening lines of "Here Comes My Girl," which ponder the question, "why bother with life," until he remembers where his co-ed wrestling match partner comes from.

"Even the Loses" and "Shadow of a Doubt" glide along with the help of organist Benmont Tench's talents and Petty's best Jack Daniels-slurpin' drawl. And "Century City" roars along in fine R.E.O. Speedwagon style, with the aid of some downright mean guitar pickin'.

I might warn you now that if you buy this album, don't play side two first. You might think the record company goofed and gave you a J. Geils album instead. "Don't Do Me Like That" sounds as if it was pulled from the Geils College of Musical Knowledge, with its backing piano boogie and watery organ slides. One can't complain, though, because along with "What Are You Doin' In My Life," it's one of the best rocka-rolla songs on the album.

"Damn the Torpedoes" is a fun album, because like those classic K-Tel TV Records, you get something totally different with every song. Except in this case, there's only one band, and fortunately Tom Petty and the Heartbreakers are good enough to pull it off.

Tom Petty and the Heartbreakers have lost their heart insignia, but they haven't lost their touch. Their new album, Damn the Torpedoes, is destined for success.

The group has a new label, Backstreet, and a new producer, Jimmy Iovine. Along with these changes, they have changed the style of their album cover.

It is no longer black with a large heart and arrow as the other two Tom Petty albums were. Instead, it is bright red with a picture of Petty on the front and one of the band on the back.
Now that you know how to identify the album, don't miss it. The new material is better than ever. Petty wrote all the songs except for two which he and Mike Campbell co-wrote. All of the songs are in the same Tom Petty style with which the band has made two big hits, "Breakdown" and "I Need To Know."