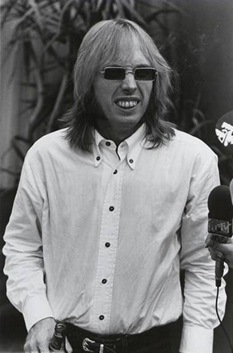 A week until An American Treasure! Plus lots of things are going on, such as a new song, a bunch of new interviews (here, and here), and his hometown's planned birthday celebrations (including a park named after him).

Anyways, five new magazine articles coming next week. And for today, a concert review from college newspaper The Stanford Daily, from July 30, 1985:

"Late in the concert, several people at the front held up an elaborate "We Love You TP" banner to Petty, and he took it and wrapped it around his shoulders. It was symbolic of the bond between Petty and his fans, the success of Petty's return to his Southern-rock roots and his ability to translate both into a rousing, heartfelt performance."

See you on Monday,